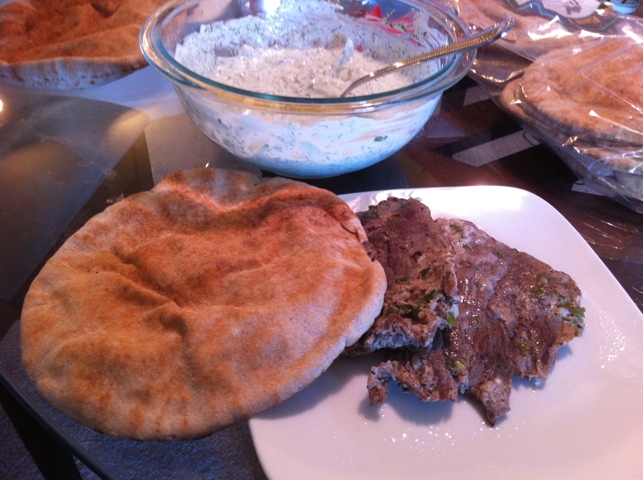 After eating a lot of Donner Kabob in Germany, which is like Shawarma but in bread, I wanted to try it. I used the recipe below (halved) with fat free greek yogurt, extra garlic, and italian parsely (inspired by a different recipe). We found "thin" sliced lean beef at the grocery store so we used that. We cooked it in the broiler to more closely mimic being cooked by radiant heat when you get it for real. It marinated overnight.

I do not know what was the central cause but the beef was really tough. I may have overcooked it and it was probably not the highest quality. Also, it was not really thin sliced which may have added to it. We ended up having to cut it intopiecesto put into the (whole wheat) pita. Even then, it wasn't great. It certain smelled good and I am not giving up on the shawarma idea but maybe with chicken next time since we can pound it really thin.

Meredith made fat free tzatziki to go with it which was very good. I do not know exactly what she did but I think she followed the same recipe from 2011-04-13.