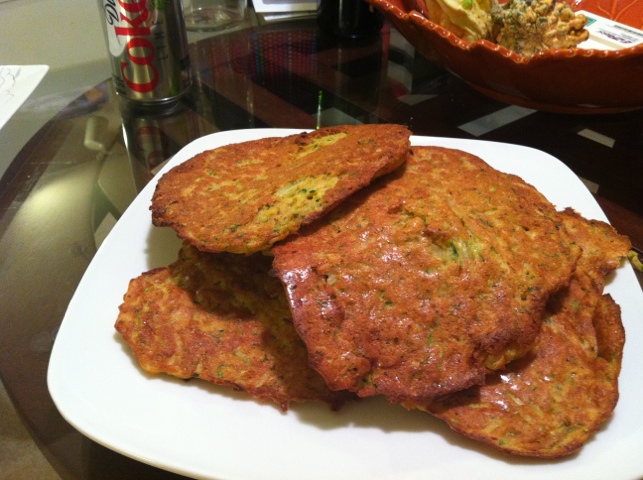 This idea really came out of nowhere. We only just decided to call themzucchinilatkes instead of fritters forChanukah. I read a few differentrecipesforzucchinifritters and basically settled on the one below.

One thing I did differently was after grating thezucchini, Ilaidout two layers of paper towel on a baking sheet. I spread thezucchinias flat aspossibleand topped it with another two layers. I then put another sheet on top and pushed as hard as I could. I put a bunch of pans on it as weight and let it sit. After 10 minutes, I changed the upper layer of towel. I didn't need the zucchiniright away so I was able to devote this time to really drying it off; which many recipes insisted was absolutly important.

Anyway, I followed the below recipe except I also added somecayennepepper,garlicand onion powder, and some dried basil. Also since I was 1.5x the recipe, I eyeballed some extra egg (whites) and I think I added too much. It was a very, very wet batter. It probably didn't help that the salt drew out more moisture. I added more flour to compensate but it was still wet. I spread them really thin and let them bake longer to compensate. They ended up okay but I'll be more careful next time.

Meredith and I both really enjoyed them. They reminded me of friedzucchiniand otherzucchinifritters I have had. They were basically out only item (we had some extramoussakasauce from themoussakawepre madefor 2011-12-22). Next time we will add some otherproteinsource or something.

(This is now in my Recipe Book section)

Zucchini Latkes [Fritters], (From Cooking With My Kid)

Preheat oven to 425 degrees. Use the large part of the grater to grate zucchini and onion. Place grated veggies in a strainer and press down firmly with a paper towel to remove as much excess moisture as possible. (Removing moisture is the most important part of this recipe!) Transfer to a medium bowl and stir in the egg. In a small bowl, mix together the baking powder, salt and 6 tablespoons of flour. Combine the flour mixture with the zucchini mixture. Add additional flour if it is still too wet. Drop mixture into 3 inch sized circles on a greased baking sheet or use moonpie pan like we did. Bake for 15-20 minutes, then turn the pancakes over, and bake for an additional 10 minutes. Fritters should golden brown on on both sides when done. Note: if they seem too moist in the middle, put them back in the oven and crisp them up some more. Some zucchini are more moist than others and need more time in the oven. Makes 16 fritters.

Edit: Originally I had written that a cup had 8 Tbsp, but it should be 16. I corrected it