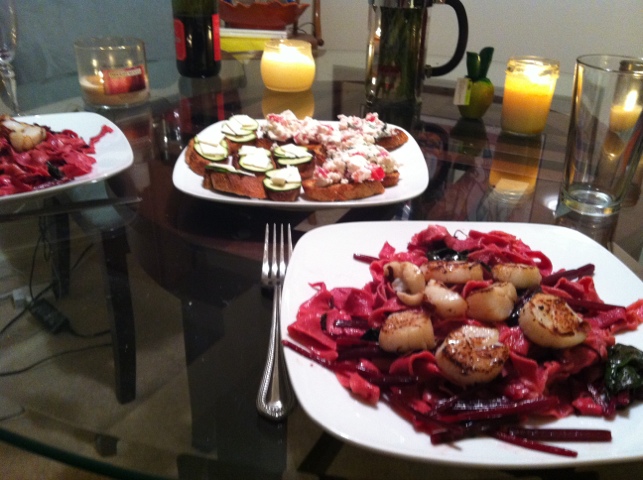 Oh boy, this was an interesting meal. Not so much the food, but more because of the cooking it. Basically nothing went right. Not to ruin it, but, surprisingly, everything turned out okay.

We made the pasta like we did on 2011-02-19 (halved) except this time, we used fresh roasted beets. Again, we used egg beaters instead of egg whites. Since we were using the food processor to grind the beets, we tried using it to knead and make the pasta. I do not know if it was just too wet or what, but it didn't work too well. It was so sticky. I had to quickly clean off a counter a knead it a bunch by hand and add a lot of flour. It had a nice red hue though.

Then, after it rested, I tried to roll it out with the pasta roller. Well, still being sticky, it barely made it through the rollers and it wasn't nice pieces. Then, when I tried to put it in the slicer ones, it wouldn't cut through it. It just mushed it.

So, again, I had to clear off a counter and I rolled it out really flat by hand. Then I coated it with a lot of flour (since it will wash off in the water anyway), rolled it up, then sliced it. I then had to manually unroll each strand. And it made a lot. Oh well. It had a really cool homemade look.

The recipe is on the linked page, but I did the one change I find makes a huge difference with fresh pasta. I added extra (maybe 1.5x) salt in the dough and I added a bunch of salt to the water. It makes a nice difference. I was worried that we would overcook it due to what happened while doing the scallops but they were fine.

We also sautéd the beet greens then reduced white wine. We mixed that with the pasta.

**Here is where it got interesting. First we weren't sure if we fully defrosted them but thankfully, they defrosted enough and all of the water came off of them (we think). The real fun came when we tried to cook them. Everything said to seer them and Meredith had read to use olive oil. We preheated the pan, added the oil and it started smoking right away. That was somewhat expected, but what came next was it auto-ignited and almost burned Meredith. It went out then we thought it was fine then it started again. I tried to move the pan onto a trivet off the stove. Well, that put some unburned oil back in the center and it ignited again. This happened one more time when I was finally able to move it to a cool burner. Of course, this happened while I had to take the pasta and of course, the smoke filled apartment set off the fire alarm (which has very hard to remove battery and is then plugged in. Oy.

We ended up using a different pan to cook them. They were still good.

**This was really interesting and worked fine. It basically required breaking the two rules of dealing with chocolate: Never heat on direct heat and NEVER let it get wet. Well, with this, you heat 1 cup (240 ml) of water with about 265 grams of 70% or higher dark chocolate over direct heat (we halved this though). Once it is all melted and consistent, you pour it into a metal bowl which itself is in an ice bath. Then you whisk it vigorously until it is a mousse consistency. It actually worked. And it was very, very good. The consistency was perfect and had a strong chocolate flavor (which makes sense since there is nothing else in it but water). The recipe says you can add some sugar but we didn't. Maybe we will next time. Oh, this is sometimes called Chocolate Chantilly

The picture and recipe are below. 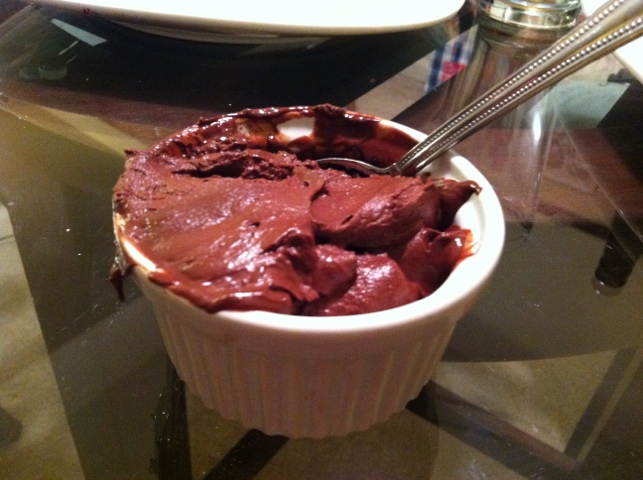