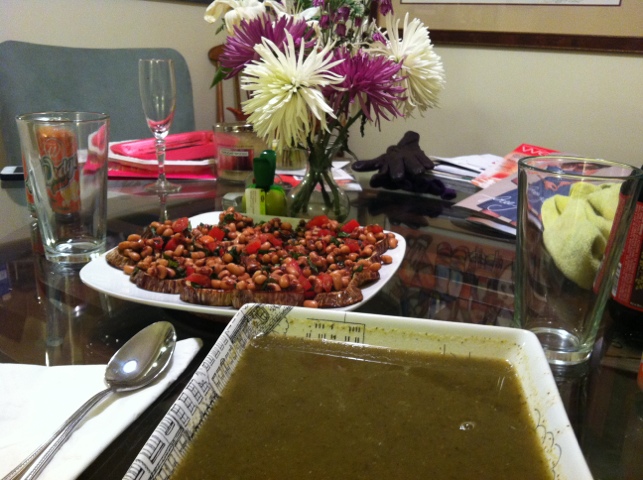 We made Pasole using the same recipe from The Homesick Texan again roasted the tomatillos. We also used double the poblanos and probably at least double the tomatillos. I also put a single dried Bhut Jolokia pepper in to spice it up. Despite the fact that I forgot the lime (lemon?) juice, these tasted rather lemony. Weird. It was good but not our best effort. I do not really know what is different though.

We also repeated our bean eggplant(basically white bean brushetta but with broiled eggplant instead of bread). However, despite being my Dad's son, we didn't have white northern beans in our inventory. We debated between chick-peas or black-eyed peas and ended on the black-eyed peas. They had a chalkier taste that wasn't as good. We also cut up a tomato which was a nice addition. I still really like this side. It is easy, low in points, and has lots of veggies. Oh, we used Israeli olive oil my parents brought back for us. It was good though the flavor was lost a bit with the mix. We used it also when we made our valentine's day dinner