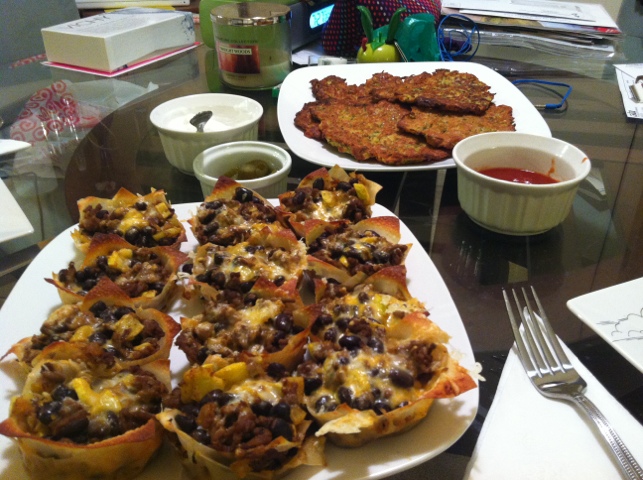 This was a very successful meal. First, the zucchini fritters. I followed the original recipe with my notes from that day (basil,cayenne, spices). I also used a bit extra baking power. I was nervous about these since last time they stuck. I extra pammed the pan and all. I also tried to make them thin so they would cook more. When I went to flip the first one, it stuck but then I switched to the sharpest, flattest metal spatula I had and I really scraped before flipping. That worked well! I also let them cook a bit longer. The fritters were as good as, if not better, than the first time.

The taco cupcakes were inspired by the recipe at EmilyBiltes but I am not going to copy the recipe since we didn't really follow it for anything but the idea. We had eggroll wrappers but not wonton so we quartered the wrappers. We pammed muffin tins and pressed a layer into the wrapper. Then we added our taco meat stuff, put some grated cheese on it, then pressed another layer into it. The double layering helps hold it all together and kind of join the wrappers. We then topped it again with the taco and then cheese.

The recipe calls for cooking them for 18-20 min at 375. However, since we had the oven at 425 for the fritters, we used that for about 8 minutes. Just until the edges of the wrappers were crisping. While that worked, next time we will do the lower temp for longer. The part of the wrapper not hanging over the edge didn't get as well cooked but we couldn't go longer without burning the outer part.

Meredith made the taco filling so she may be able to clarify, but it was largely inspired by the taco stew without the water. We used sautéd onions, browned extra-lean beef, black beans, taco seasonings and diced yellow squash (since more zucchini would have been redundant).

These were extremely good, even if the wrappers didn't fully crisp. We will definitely make them again. And use the idea with the wrappers to make other meal cupcakes as well.