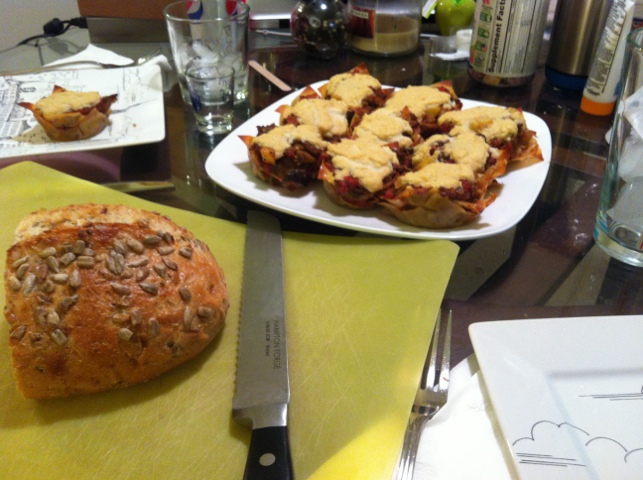 This was a new twist on an old favorite. I made Moussaka Cupcakes. I used ourmoussaka recipe to make the filling except I halved everything (therefore using the normal amount of seasonings). In addition, I chopped up potatoes and put them in at the beginning. Finally, I broiled eggplant and added it too. So basically, it was all the layers of moussaka as one filling. I also made the béchemel halved. We only had sweeter almond milk and vanilla unsweetened almond milk. Except that this brand's vanilla is more strong than the Almond Breeze or even Silk. I used extra salt to try to balance it out.

I then followed the general idea of Taco Cupcakes. I put down the wonton wrappers, then filled them halfway with moussaka. I put another wrapper on, filled more sauce, then I topped it with béchamel. Cooking them was the usual issue of the exposed wrapper getting too crispy while the unexposed was still soft.Thankfully and somewhat surprisingly, almost all of them came out of the cups nicely.

We also had bread since I needed carbs for my bike ride the next day.