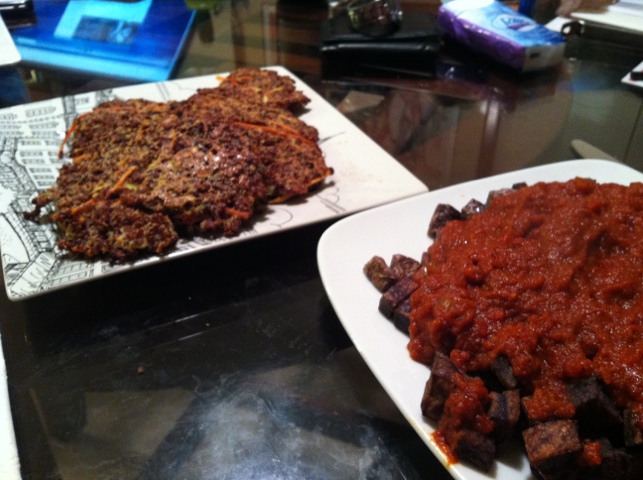 We made quinoa from the recipe below. Meredith put it together so she may have more comments, but we basically followed the base of the recipe though we needed a bit more egg. We also used gouda instead of the parmesan. We also used regular flour. Instead of frying it, we baked it like the zucchini fritters. We baked them at 440°F for 15 minutes, then flipped them and baked for another 10. I was prepared to have to really scrape but in the end, they came off nicely. They were really good. I really liked the thin parts that were extra crispy. The flavor was subtle which contrasted with the patatas bravas and its heat. It didn't help that my head/nose was stuffed so the flavors were even harder to discern.

The patatas bravas we more or less based on the standard except I also added some leftover canned sauce. I used a lot of cayenne and all of the called for paprika was hot paprika plus, I added some smoked hot. I also forgot the garlic and vinegar but I added a lot of onion and garlic powder. The sauce was good, but it was rather spicy. Again, being a bit stuffed up, made this strong flavor eclipse the quinoa.