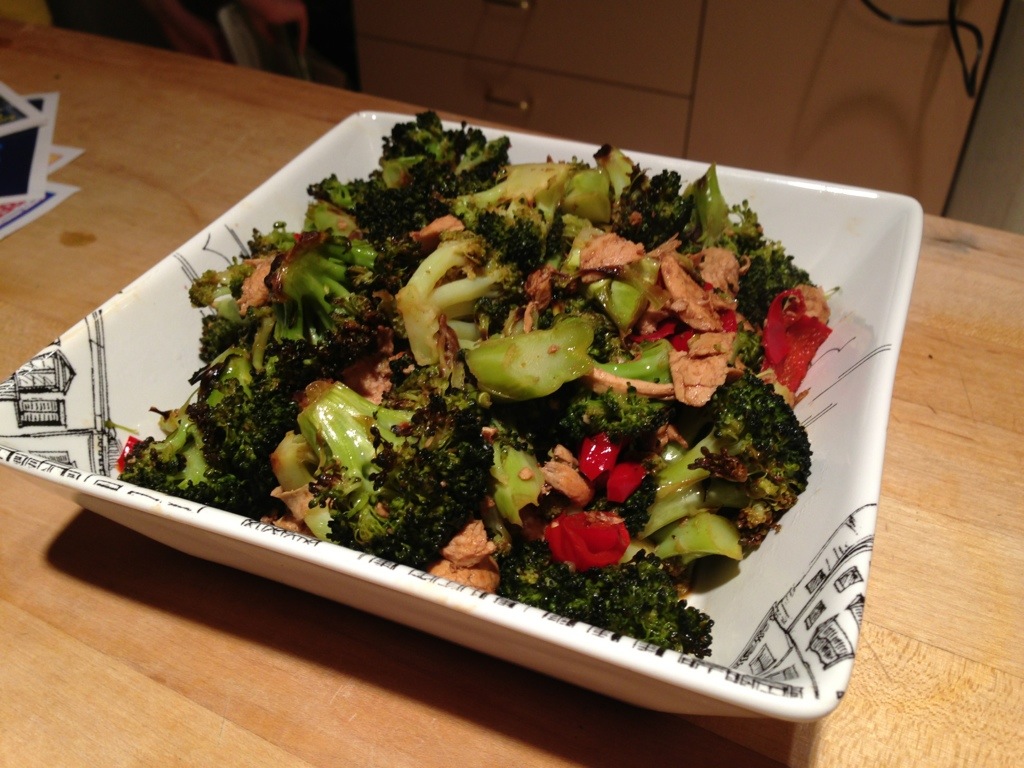 This was another attempt at making a mostly broccoli meal in a sauce (see first attempt). I was trying to recreate the sauce that is on a pasta dish at a restaurant I like. The dish and description is as follows: (BocciRestaurant, Menu)

but, when you look it up, no only version of Chicken Scarpariello fits that description. Also, itdoes not mention it, but there is an asian taste to it too. I describe it as a Chinese food restaurant cooking italian. So, I was left to my own devices. I decided to try to use the Broccoli Beef recipe for rough proportions of liquid and I figured that corn-starch would help coat it. (As I will mention later, I forgot thecornstarchwhich may or may not have had an affect on the output). That recipe isapproximately8 Tbsp of liquid to 2 tsp of cornstarch. So I aimed for 12 Tbsp liquid (3/4 cup) to 1 Tbsp cornstarch (3 tsp). Here is what I used for liquid:

I used animmersionblender to mix it all (and to make an emulsion with the olive oil). I forgot the cornstarch

We used about 2.75 lbs ofbroccoli. Since Meredith didn't have a steamer, we roasted it at 425 for 20-25 minutes. As it was almost done, wesautedsome Trader Joes Imitation Chicken. Then we added the roastedbroccoli. Finally, I added 8 or so chopped peppadews, a little of the peppadew liquid and some crushed red pepper. I mixed it all and let it boil down.

Honestly, it was reallydisappointing. Thebroccolibecame almost water-logged and tasted like I had boiled it; the sauce was thin and not very flavorful, and it was just kind of boring.

My guess is a few things went wrong. First, forgetting the cornstarch made the sauce not really thicken making it harder coat everything. I am pretty certain this was a contributing factor. Then, I think roasting the broccoli was not the way to go. Roasting dried it out (which is very good when eaten roasted), but it was then able to absorb the sauce and taste water-logged. I think steaming works better to keep the broccoli more crisp. Blanching would probably work really well but according to Alton Brown, even blanching removes the nutrients of the broccoli.

Procedures aside, I think the final nail is the couffin is simply that I still haven't even gotten close to the flavor of the sauce. I am not sure how to proceed on this one. I guess I will continue to look up different recipes and see if I can get closer. Maybe I'll make smaller batches to try different techniques.

Also, just to note, the Trader Joes chicken is mediocre at best. It was better mixed in but raw, it had a funky and smoky flavor. I am trying to make this vegan, I'd go with a differentprotein.__