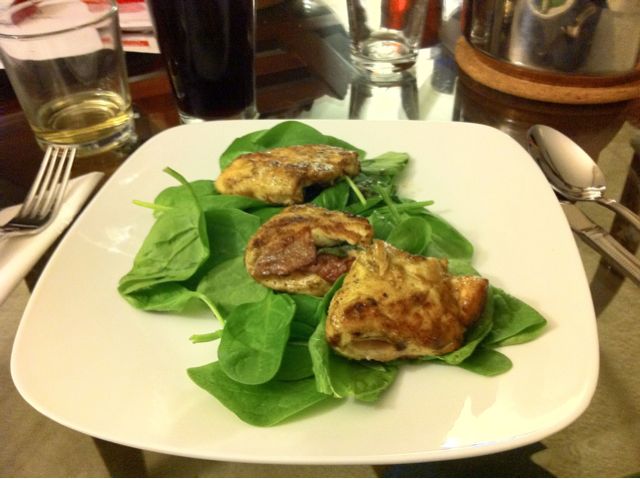 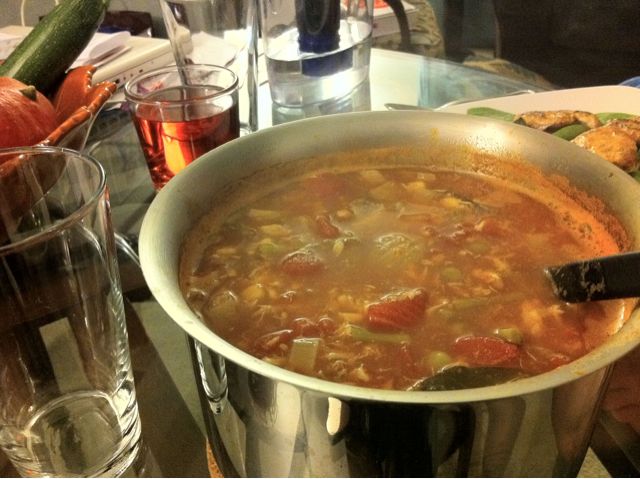 The chicken saltimbocca was made roughly from Gina's Recipe except we made some modifications and made it smaller. We used tenderloins (the usual) and did not end up using any butter at the end. Also, we used much more fresh sage. The taste was very strong from the sage. I need to get better at controlling the heat of the pan. After the chicken was done (and slightly burned), the wine deglaze made the entire apartment fill with wine steam. Still, it was very good. Also, we forgot the salt and pepper but it was fine. Also, we used German prosciutto because it was much leaner and lower calories.

The soup was very roughly inspired by this but I really just used it for the ingredient list. I used a can (I think ~14 oz) diced tomatoes and then I filled the can with water and added that. I then used the immersion blender lightly to thicken it. I still left it very chunky. I then added a cubed yukon gold potato, asparagus (was going to go bad), frozen corn and frozen spinach. After simmering for a while, I added ~2/3 lb crab. I bought claw meat. While it looked less nice than whatever we got before, it was more flavorful. Also, I put some Old Bay in (of course!). And some Sriracha for a little bite. One nice thing is that since we were making it, we did not skimp on the crab like some restaurants.

The soup ended up a bit salty but very good. It was really thick. After dinner, I added almost 2.5 cups more water and some sodium free beef and chicken broth. That should stretch it a lot more.