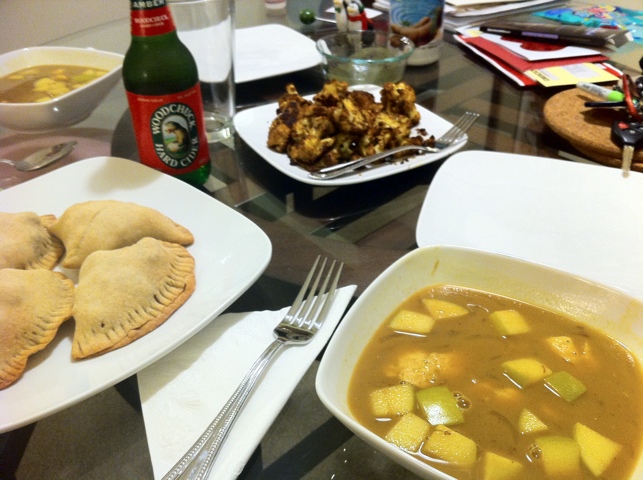 This was a pretty suscessful meal on the whole. I will go through the item.

The samosa were our normal dough, again done with almond milk. The filling was also pretty standard except that we were running low on curry powder and wanted to save it for the soup so we used garam masala,turmeric,coriander, mustard seed, cumin,paprika, etc (I do nto remember them all) and made something close enough. As usual, we served them with mint-chutney and tamarind sauce mix.

Thecauliflowerwas really good and roughly based on the recipe below. Like the samosa, we were trying to save on the curry powder so we did a similar spice mix. I basically followed the first part of the directions but did some of the roasting at a lower temperature for when it was sharing the oven with the samosa. Ireallyliked it and we will do this again. I wonder how it would be withbroccoli.Caulifloweris a bit expensive (actually, it was the single most expensive part of the meal), so other things may be better.

Finally, the soup was based on the recipe below but we made a major change. We used So Delicious coconut milk instead of half and half. We used the lowest calorie one with 50 calories and 5 grams of fat per cup. Also, we used splenda (and less equivalent). Finally, we addedgarammasala and used (much) less fat/butter. It was pretty good though not the best mulligatawny ever. It was also a pretty easy recipe. We didn't really taste the coconut but it was creamy. Half and half would have just been too many calories. Also, the apple was a bit strange but not really bad.

Now, the biggest question is how do I get rid of the tumeric stains I have everyone on my hands.

Overall, this ended up being a pretty healthy mealbecauseof our changes. We will do it again!

(This recipe is now in my Recipe Book)

Easy Mulligatawny (from The Pioneer Woman)